With many races canceled or postponed due to the Coronavirus pandemic, online cycling platform Zwift and Tour de France organizer A.S.O. teamed up to develop the Virtual Tour De France – for both the men and women. From July 4-19, athletes competed on six stages held only on the weekends. CCC-Liv riders scored top-10 finishes and Ashleigh Moolman Pasio finished first on the queen stage.

After technical issues on stage four of the Virtual Tour de France on Zwift, CCC-Liv’s Ashleigh Moolman Pasio was eager for a good result on stage five. Saturday’s queen stage included a third category climb before tackling a virtual version of the legendary Mont Ventoux (22.9km) with an average gradient of 4.9 percent.

With under 7km to go, CCC-Liv’s Pauliena Rooijakkers made a break, pushing 300 watts and thinning out the front of the peloton to about 12 riders. Rooijakkers opened the field for Moolman Pasio to take the lead. She put down the power out of the saddle to extend a huge lead on the rest of the pack. Only one rider could stick with her, but Moolman Pasio kicked up the pace again and crossed the finish line solo – 23 seconds ahead of her nearest competition.

“I was really happy to take the victory in the queen stage of the Virtual Tour de France,” said Moolman Pasio. “My team was really great today. Now, I’m really looking forward to racing in the real-world next week with my CCC-Liv teammates.”

CCC-Liv finished fifth as a team in the general classification after the final stage on Sunday.

Without the opportunity to compete in a real-life Tour de France, the Virtual Tour has been a welcome opportunity for pro women’s cyclists. Competing on the same stages and for the same television coverage as the men, the race has been a huge boost toward gender equality in cycling.

The CCC-Liv team gears up for their first races on the road this week in Spain, with Emakumeen Nafarroako Klasikoa July 23, Klasikoa Navarra July 24, and Durango-Durango July 26. 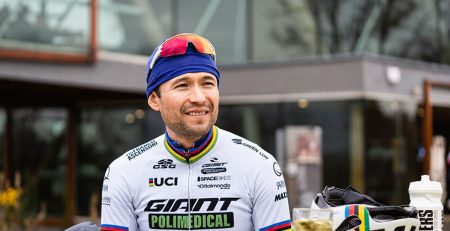